To everyone visiting this page at the STH WPOZ website. I look forward to you being involved as I continue to fight for Stanwell Moor.
*We need as many homeowners as possible to subscribe to ensure the STH Campaign pushes on in 2019.
So please support the most important community campaign in Stanwell Moor's history, seeking to have Heathrow agree that OUR VILLAGE after "DECADES" of aircraft noise and pollution "MUST BE INCLUDED" in the Wider Property Offer Zone.

My WPOZ Campaign for Stanwell Moor!

This page explains why a group of WPOZ supporters knowing this is a full-time job and I could no longer work for free. Came to a decision it's unfair that one person is doing all of the work and paying for everything. Arranging and attending meetings, covering marketing and online costs, while suffering a huge loss in income, to manage a campaign that's potentially so valuable to so many. Decided the campaign must continue as a subscription service.

There is still a long way to go and so much more to be done in 2019. No matter what your future plans are, if you intend to remain in the village, or move when work on the airport begins. The wider community must play a part to strengthen the campaigns chance of getting us what we deserve.

To enable me to continue the fight and send a clear message to Heathrow’s decision makers. The group delivered a subscription letter and a flyer showing 2018 achievements, where they ask as many homeowners as possible to contribute from just over £1 per week in 2019 by means of a subscription. The subscription amount by *resident’s requests, was left as an individual choice with a minimum of £4.99 per month for 12-months.

*Some residents fearing the campaign may have to close, if we don't get enough homeowners to subscribe, want to pay £20, £10 or more per month, as the potential rewards if we're successful mean so much. Personally I'd rather have 200 out of 500 homeowners paying £4.99 a month than increase the burden on just a few folk. The reality is that this is the most important campaign in this villages history and EVERYONE should be supporting it. I want to make it known that I do not expect pensioners or low-income families to subscribe!

So, if you feel as strongly as they do about getting a fair deal for our village, please subscribe today to keep the campaign pushing on in 2019.

To keep the campaign going we need the majority of our registered members to subscribe as in 2018 only 43 out of 520 homeowners even donated.

Subscriber benefits: I will personally represent subscribing residents issues. - Only subscribers will have content access, or be updated, or take part in campaign discussions, or have access to associated social media and online forum. *Each subscriber will be an official campaign supporter and the more supporters we have, the better our leverage will be. Subscriber Registration - Full Campaign Updates - Subscriber Meetings - Subscriber Social Media - Plus other benefits I am working on as I continue to campaign on your behalf.

This campaign takes over 60-hours of my time each week and as mentioned above it has seriously impacted my income, however I knew this was going to be a big task and there would be a lot of work to do. I knew there would be a price to pay if we were to have a chance of making Heathrow Airport admit to the blight they have caused us for decades and FINALLY compensate Stanwell Moor residents. - I just need some help to keep it going!

Help us get Compensation from Heathrow Airport for Stanwell Moor Residents.

Funding so far and how we go on?

Everyone knows that I invested my time, resources and my own funds into the campaign without financial support. I did this because there was a time-limited opportunity for a fair deal for the village and the campaign had to be lodged by the 19th December 2017 or the opportunity would have been gone for a decade. However it's now come to a point where I need peoples support to allow me to continue and keep going forward as 2019 is set to be busier for me than last year.

Jon stepped up and he's been a welcome help. - But here's what a few supporters have to say: 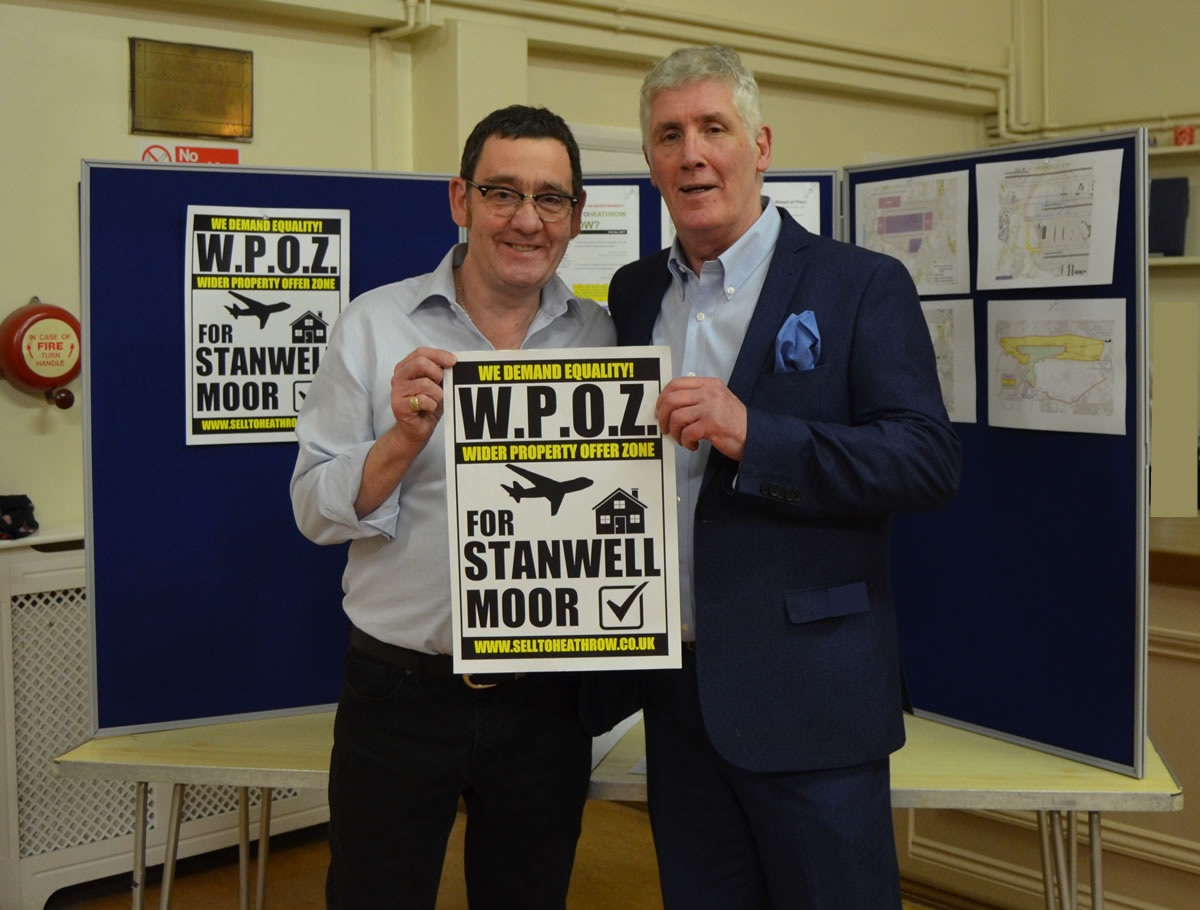 1. LET'S BACK THIS:
"Jim has paid for everything, created the whole campaign, designed and developed the website, purchased the necessary software, paid for hosting, created the newsletter, researched Heathrow and purchased the marketing materials that we all get delivered. We must get behind this - BK, Horton Road."

2. A ONE-OFF OPPORTUNITY:
"He realised there was an opportunity for us to get compensation from the airport (when no-one else did) and if we all got together as a community and backed the campaign we might win this. He built this website so Heathrow would know Stanwell Moor wants WPOZ and I support that. - I'm 100% in! - SD Horton Road."

3. OUR VILLAGE IS A MESS!
"The village has changed and not for the better. With aircraft lower over our homes, now taxis, lorries and holiday parkers. We can't get in and out of the village, or park because of the congestion. Noise and pollution is worse and now we have a waste plant. Heathrow lied! - Count me in DH, Hithermoor Road."

4. HE'S FUNDING US!
"This guy has put his money where his mouth is and has done all of this work without telling people they should pay to be part of it. Ask yourself (who would have thought of this?) - He has created something we all can be part of and now needs to know he has your support. - No brainer, - HE, Spout Lane."

5. THE BOTTOM LINE:
"Jim has given us an option but if we don't back it this ends here. As what's the point in him shelling out more money to run a one-man-show? Its up to us now, or any chance of compensation will be gone. I don't know about you but I'd like the £100,000 that my 25% would give me in my bank!! - AF, Horton Road."

6. A TOKEN DONATION:
"£20 really?? - I'd pay £2,000 to even have half a chance to make Heathrow Airport pay for the part they played in ruining this village. We should have had the promise of compensation for living under the south runway decades ago and with this I hope we finally can!. TB, Hithermoor Road."

PLEASE DON'T PUT THIS OFF - *REGISTER TODAY!
THE CLOCK IS TICKING - Let's get everyone on the village registered as we take the fight to Heathrow!

While I need your support the the choice of any amount pledged is a personal one.
Ask yourself these questions. Can I afford to help? - Can Jim afford to keep doing this without my backing? - Is this service something that potentially benefits our community? - If successful how much will this be worth to me?
Registration remains free. - Subscriber benefits are listed below!

£?? Per Month
DETAILS BELOW!

Registrations are free. However the community would decide how the service would be funded. - Registration remains free but from this point I will only represent subscribers and only subscribers will be updated, be given news updates, or have social media & website access.

It was agreed if (every home supported) a donation would be enough to build, design and manage the campaign. However this has failed as only 43 or 11% of homeowners actually donated last year. While I worked full-time on the campaign. SUBSCRIPTION DETAILS BELOW!

££⇒ DONATE DIRECTLY VIA BANK ACCOUNT »»
Subscriptions are by standing order. Paypal details can be supplied, however PAYPAL DEDUCTS 5% from every payment. To "SUBSCRIBE DIRECT" please use these Bank Details (Reference: WPOZ SUBSCRIPTION) to make a transfer. Alternatively you can pop a cheque with name & address on the reverse in my postbox or email jim@selltoheathrow.co.uk - THANK YOU!

Scroll to Top
CHRISTMAS 2018. Jim is presented with a Pride of Spelthorne Award. In recognition of all the work he's doing for OUR Village!   Support WPOZ!